Traction therapy is a nifty thing

About 10 months ago I started having problems with my right arm. I got a frozen shoulder, and an increasing numbness in my little and ring finger. Eventually the frozen shoulder healed, but the numbness increased. By April I also had severe pain in the meaty part of my underarm, and I, who was once nicknamed “the mother of power” suddenly couldn’t lift anything. By then I had discovered that I have a prolapsed disc in my neck, which push on the spinal cord, but which the docs would rather not operate. Fine with me, those operations are often not a success. Eventually I found a neuro-chiropractor who came highly recommended. Unfortunately it didn’t help my arm, though the lower 2/3 of my spine became way more flexible, so yay for that. I was then sent to a colleague who passed me on to a physiotherapist, and this guy is my new favourite. He’s doing traction therapy, which essentially means that my head is strapped into a harness, and as I’m lying on a massage table I’m hooked up to a machine which pulls at my head. And it helps! It really does work. It takes time, but there’s a noticeable change. Woot! I wonder how my arm will feel by Christmas. Hopefully it will be back to normal…

Lightning is no joke

323 wild reindeer killed by lightning. It’s rather mind boggling. They still don’t know exactly how it happened, but I’m morbidly fascinated. A whole flock dead within a few minutes, up in the mountains. At least it was quick. So if anyone doubts the incredibly destructive power of lightning, here’s proof you don’t need to be hit directly to die. The lightning hit the ground, and ka-zam! 323 reindeer were electrocuted.

A harvest of miniatures

We started our veg garden a bit late this spring. It had to be moved. Which means that some of the veg grown are not as large as we would like, but they’re wonderfully cute. The largest heritage carrot here is all of 8 cm long, the smalles ones not even 2. The beets are like candy. Wouldn’t have bought any this size, but coming from our own garden these miniatures are pure gold. 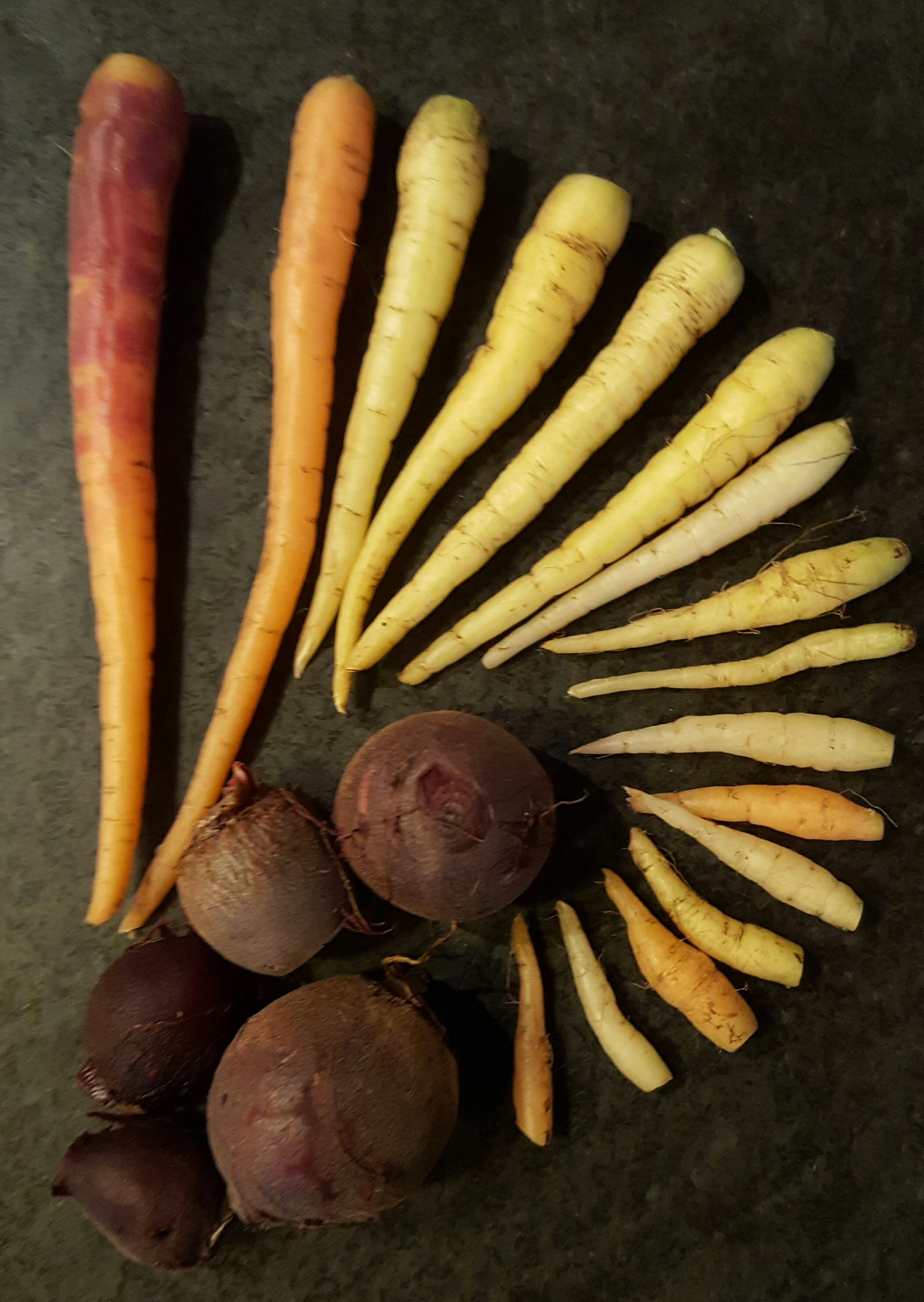 Hubby starts a new job next Monday, so we decided we needed a trip, just the two of us. The kids are back at school, after all. and they’re old enough to take care of themselves. So, what should we do? Mini cruise to Copenhagen? Yes, grand idea. Only, they only had the worst cabins left. With bunk beds. So we looked in the other direction and booked two nights at a mountain resort. And we’re so happy we did. The drive up was amazing. The food here is nice. Nothing to rave about, but not bad. Wholesome and tasty. But the views! Ah, this is balsam for the soul. My heart’s been making leaps of joy at the sheer beauty. At one point I felt like I was about to burst from joy, but I burst into tears I stead. No idea where that came from, but I do know that this kind of nature speaks to my soul. What a blessing the good cabins were sold out on the ferry to Copenhagen. This is a gazillion times better.

Some photos from our trip today:

A summer farm in Fefor

One of the summer guests.

Along the Peer Gynt road

View from our window at Dalseter hotel.

Bought some white Vans a while ago, planning to decorate them. Took a while to decide, but they’re now done, and I’m rather happy with the result.

MS and gluten is a crap combination

At least it is for me. A month ago I started eating gluten, after having been without for six years, to trigger a reaction that could be measured by blood test. Almost immeadiately I sensed changes in my body. The first was water retention. I ended up having to remove my rings, as they become way too tight. I gained with with an amazing speed, but thankfully it levelled out (still, I fear it will be hard work to get those kgs off again), I got eye pain, headache, hipache, more stumbling and unsteadiness than I’ve ever had (and a souvenir mega scrape on my right knee to remember how it feels to have no idea where your feet are or what they do). I got itching – gods I’ve been itching like mad all over – and I’ve been so, so tired. Ridiculously tired. Zonked out like woah. With brain fog and forgetfulness. Really, it’s been crap.

A week ago I had the blood test, and since then I’ve been avoiding gluten like it is the plague. The eye pain is gone, as is the swelling – my rings are back on. But I’m just as unsteady. I get sudden “releases” in my hips, like they don’t want to hold me up, often while walking the stairs. Thankfully those releases last a fraction of a second, but it both hurts and scares. I really, definitely, absolutely, passionately do NOT want to fall down the stairs. Or, as things should be stated in the positive (as the subconscious is apparently unable to hear a negation), I really, definitely, absolutely, passionately want to walk down stairs with complete ease and grace. Actually, I would love to run and jump and skip carefree from boulder to boulder like I did in my childhood. To begin with I’d be happy to feel safe in the stairs. And lose weight (despite some loss of fluid, I’ve not lost any weight). At least I’m no longer itching like mad.

So, to those of you who read this and wonder if there is anything in all the gluten talk, is it as bad as people say: If you wonder, and you have some health issues, I’d suggest one thing: try it! Try being totally gluten free for three months and see what happens. Make notes of how you feel now, and compare. When I quit gluten I went though horrid withdrawal symptoms and had to remove everything that had gluten in it from the house. I would sleep walk to the bread bin to grab a slice and stand there finishing off my snack and wonder what was going on. Ridiculous. After three weeks I was out of it, thank goodness. Now I don’t care, I really don’t want anything with gluten in it.

13. July I went for my first appointment with a holistic GP at the Balder clinic. In their own words, the premier clinic in Europe for functional medicine. And I have to say this – they have a very different approach, compared to a standard GP. It costs quite a lot more, as it’s not part of the official health care system, but the attitude towards me as a patient is also vastly better. As this was my first time, we had 90 minutes. 90 minutes where my medical history was recorded, and she was digging into childhood issues as well as family issues. Afterwards I filled 13 of those blood test tubes, got test sets home for 24-hour urine sample, two day fecal sample (with instructions and everything going needed to send it to the lab in Denmark), and paperwork for a gluten/celiac blood test. Which I will take after 3 weeks of eating gluten to make sure there is a reaction. I had a croissant the first day, which was absolutely delicious. After 30 min I was queasy, and then my legs became more painful than they’ve been in a very long time. It’s now been 11 days with daily gluten intake, and I’m very happy I’m almost halfway through. Those blood tests better show something, because my mood has changed – and not for the better. I am constantly itchy, it’s like I’m itching inside my blood vessels, and it’s rather horrid. I don’t sleep well, and I’m constantly tired. More exhausted than I usually am, more forgetful, more zonked out. But it will be good to come to the bottom of this, and hopefully find a way towards at least some healing.

I’ve also got a tip on a good chiropractor, so I’m going to call him tomorrow. Maybe he can convince the renegade disc in my neck to align properly. A disc started sliding last winter, so it’s squeezing the spinal chord, which is affecting both arms, but especially the right. I can hardly carry anything anymore, and that’s very wrong (I was nicknamed “Mother of Force” at a former workplace, not much of that left now). Also annoying as I’m right-handed. Anyway, the specialists won’t operate until there’s no other option, and I really don’t mind. I just want my body to work… So fingers crossed for the chiropractor!